Both Botswana and its neighbour, Zimbabwe, form a common entity and a British heritage in Central Southern Africa, but there the resemblance ends. The Bechuana formed an alliance of sorts with the Pritish to protect them from the Boers in the then-nearby Transvaal. Upon a peaceful transition to independence as Botswana, it has evolved into a democratic and peaceful country. Zimbabwe, formerly Rhodeisa, is a failed state, although potentially, Zimbabwe could dominate tourism if governmental affairs were orderly. This map focuses on Botswana simply because that country is a beacon of orderly pleasantness in the continent; well run, routistacally well developed, with good infrastructure, and close to the game preserves of both South Africa and Zimbabwe. The map includes a large inset map of Gaborone, the capital, but most visitors fly into Maun, in the north, which is close to the country's greatest assets, the Okavango Delta, home of one of the greatest wildlife preserves on earth. Personally, I prefer the central Kalahari Desert area, because it is so unique, but wildlife viewing is the source of the country's top rating as a tourist destination. To the west is Namibia, another country that has evolved into a sensible independent country, and to the east and south is South Africa. One can enter Zimbabwe at Kazanula or at Plumtree, to visit Victoria Falls, one of the great physical attractions of Africa. The second side of our maps shows this country in great detail, and having lived in the country for several years, I can attest to its attractiveness. Inset maps of Harare, the capital, Bulawayo, Victoria Falls, and the Great Zimbabwe Ruins make this map essential for anyone visiting this country. A word of caution must be fiven here, in that the condition of many of the roads has deteriorated overtime, petrol is often unavailable, and basic foodstuffs are costly. The map has been printed on durable tear-resistant stone paper, and should outlast any visit. 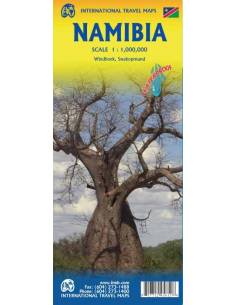 1967
5 200 Ft
Having travelled extensively around Namibia, I can attest to its attractiveness. The fact that we are now beginning our 7th edition attests to the on-going popularity of this country as an international travel destination. Although it is a desert-like country, we have printed this edition on waterproof paper, more for durability than necessity. This adds... 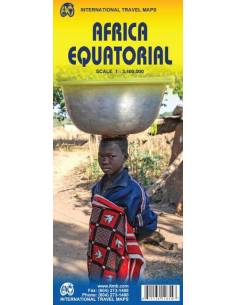 1982
5 200 Ft
Méretarány 1 : 3 400 000 This is the third of our regional maps covering the African continent and covers the portion just south of Nigeria/Cameroun that, essentially, straddles the equator. The jungle-like western half has always been referred to as Equatorial Africa, which is a bit of a mis-nomer because Uganda and Kenya also straddle the equator....

1945
6 950 Ft
Méretarány 1 : 3 400 000 There are three possible routes to traverse Africa top to bottom. From the east, the only route is via Egypt and Sudan to Ethiopia and East Africa. The route through Algeria, known as the Hoggar (or Haager) route is next, with the route through Morocco to West Africa third. Traversing Africa is one of the great adventure trips...

42586
4 200 Ft
Updated annually, MICHELIN National Map Tanzania and Zanzibar - will give you an overall picture of your journey thanks to its clear and accurate mapping scale 1/1,300,000. Our map will help you easily plan your safe and enjoyable journey thanks to a comprehensive key, a complete name index as well a clever time & distance chart. Michelin's driving... 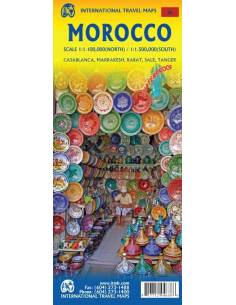 5813
5 200 Ft
Casablanca, Marakesh, Rabat, Salé, Tanger melléktérkép Morocco is a haven of peace in a world beset by religious strife. The country has close ties to Europe, with the Strait of Gibraltar allowing easy ferry access, and the country is interesting, well-developed, and safe. The fabled cities of Casablanca, Marrakesh, Rabat, Sale, and Tangier are al...

2008
5 200 Ft
The continent of Africa is fascinating. Whether on wishes to visit the continent or just learn more about it, a detailed map is vital, and a good map is hard to find! The first edition of our ITM Africa map sold out in less than two years. We have added a considerable amount of data to this edition of the map, particularly in the northwest portion. One... 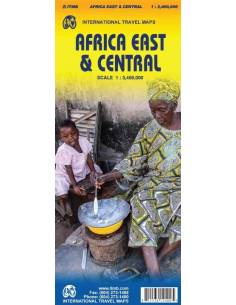 2522
5 200 Ft
Méretarány 1 : 3 400 000 This is the latest map from our growing digital data base on Africa. One side of this map concentrates on the five countries of what is generally known as East Africa - Kenya, Uganda, Tanzania, Rwanda, Burundi, with bits of neighboring countries thrown in. The second side covers what has always been called Central Africa,...
Nagyításhoz érintsd meg (kattints)