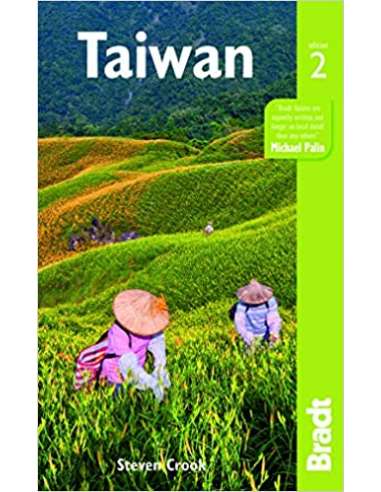 Taiwan is one of the most crowded countries on Earth but beyond the ocean of people and vehicles, far from the neon and noise that confronts new arrivals, there’s an island of breathtaking mountain vistas, bird-rich forests and quaint villages where folk religion thrives. This is the guide for individuals who want more than the treasures of the National Palace Museum, the beaches of Kending and the well-beaten trails of Alishan. Whether you aim to rough it on mountain peaks, observe age-old rituals in tucked-away temples or wallow in five-star comfort, Bradt’s Taiwan will lead you on an unforgettable journey through Asia’s newest destination.

This new edition includes an even greater emphasis on the Taiwanese favourite pastime of local food, as well as increased coverage of increasingly popular east Taiwan and expanded information about the National Palace Museum Southern Branch. Place names and other useful words and phrases (for ordering food and arranging transport) are presented in Chinese script for convenient communication.

Detailed coverage of the capital city Taipei is complemented by a chapter-by-chapter breakdown of the rest of the country, from Hakka Country to Kaohsiung and Pingtung and the minor islands. More than 58% of Taiwan is covered by forest, making the country as interesting for its wildlife and outdoor activities as for its cities and towns. Taroko Gorge, Mount Jade, national parks, beaches and birdwatching, temples and monasteries, peaks and mountains are all covered, along with beguiling islands such as coral Little Liuqiu, saltwater hot springs, the East Rift Valley and popular Lukang.

Taiwan is often described as 'more Chinese than China', but in reality it's a complex blend of 18th-century China, ancient Austronesia and 20th-century Japan, with dabs of post-war Americana and an abiding passion for anything that tastes good, wherever it comes from. Bradt's Taiwan is the perfect companion for discovering all of this, written by an expert who knows the country inside out and is well versed in delivering exactly what you need for a successful trip.