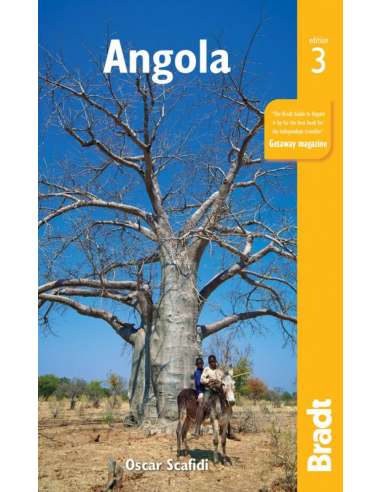 This new third edition of Bradt's Angola remains the only dedicated English-language guide to this increasingly popular southern African nation. Thoroughly updated, it includes full practical and background information, everything you need to know about the capital city, Luanda, plus coverage of the rest of the country in 16 chapters. Also featured are 38 maps, including detailed city maps for all 18 provincial capitals, plus a specific section devoted to the sometimes-tricky process of applying for a visa.

Bradt's Angola is written by expert author Oscar Scafidi who lived and worked in Angola for five years, has travelled to all the country's provinces, and who has successfully completed a record-breaking kayak trip along the length of Angola's Kwanza River. Thanks to his knowledge, Bradt's Angola is ideal for everyone from independent surfers and bird-watchers on organised tours to fishing enthusiasts, conservationists, surfers, NGO workers and overlanders, not to mention adventurous travellers simply wanting to discover this intriguing country.

Angola continues to change at a rapid pace and offers everything from colonial Portuguese ruins to $100-a-plate sushi bars, landscaped waterfronts to grand public buildings, Portuguese and Brazilian heritage to frontier diamond towns, tropical rainforests to desert, and relaxed coastal resorts on 1,000km of unspoiled beaches. It's also the site of the UNESCO World Heritage listed Mbanza Kongo, once the centre of power for the Kilukeni dynasty, who founded the city almost 100 years before the arrival of the Portuguese.

Whether wildlife watcher or surfer, business traveller or pioneering adventurer, Bradt's Angola provides all the information you will need to get the most out of this vast country.

When to visit, Highlights, Suggested itineraries, Tour operators, Red tape, Embassies, Getting there and away, Health, Safety and security, What to take, Money, Budgeting, Getting around, Accommodation, Eating and drinking, Public holidays, Shopping, Activities, Photography, Media and communications, Business, Living in Angola, Cultural etiquette, Travelling positively

History, Orientation, Getting there and away, Getting around, Local tour operators, Where to stay, Where to eat and drink, Entertainment and nightlife, Sports, Shopping, Other practicalities, What to see and do, Around Luanda

Getting there and away, M’banza Congo, Soyo

History, Getting there and away, Benguela, Around Benguela, Catumbela, Lobito

History, Getting there and away, Lubango, Around Lubango, Bicuar National Park

Getting there and away, Luena, Cameia National

History, Getting there and away, Malanje,

History, Getting there and away, Lunda Norte, Around Lunda Norte province, Lunda Sul 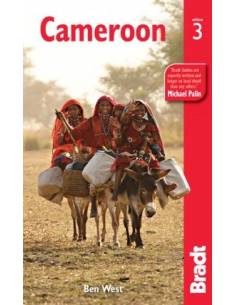 2233
7 000 Ft
With ancient chiefdoms tucked between terraced fields and volcanic mountains, Mount Cameroon - Africa's highest peak, the impressive Waza National Park with its herds of elephants, and the coast's sleepy palm-fringed beaches, Cameroon has no shortage of attractions, yet it somehow fails to be a tourist haunt.

770600
9 950 Ft
Since Bradt first published a guide to Benin over 10 years ago, the country has become more popular with visitors to West Africa. Bradt's Benin remains the original and one of the only comprehensive guides in English to this French-speaking country, arguably the region's best wildlife destination and the birthplace of the much maligned and little...
Nagyításhoz érintsd meg (kattints)
Regisztrálj vagy lépj be!