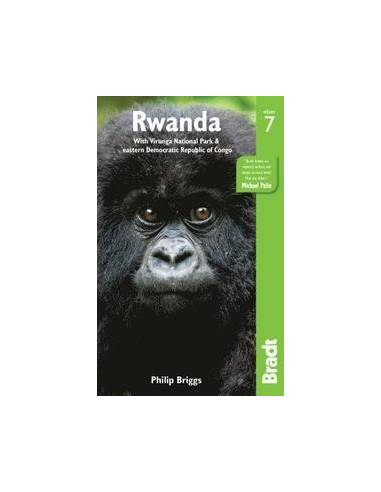 Now into its seventh edition and written by Philip Briggs, the world's leading writer of guidebooks to Africa, Bradt's Rwanda has been the go-to guide for visitors to this historical and resurgent 'Land of a Thousand Hills' for nearly two decades, and it continues to be in a class of its own when it comes to in-depth information on this emerald slice of East Africa. With freshly researched and updated details on developments across the country, Bradt's Rwanda includes up-to-date maps of rapidly modernising Kigali, information on hiking to the summit of Mount Bisoke and a newly expanded chapter on excursions into the neighbouring DRC.

In this new edition are extensive and recently updated maps and natural history information, details of kayak and canoe excursions on Lake Kivu and the Mukungwa River, all you need to know about tracking not only mountain gorillas in Rwanda's Volcanoes National Park but also lowland gorillas in the Congo, and information about overnight stays on tea plantations at Sorwathe or Gisovu. Also covered are Nyungwe Forest National Park, where a wealth of endemic birds and primates inhabit the largest surviving montane forest in East Africa; Nyanza, where the hilltop Rukari Palace Museum marks the site of the old mwami's (king's) palace; and the National/Ethnographic Museum of Rwanda, the top cultural site in Rwanda's second city, Huye (Butare). Coverage of nearby cities and national parks in the neighbouring DRC has been expanded since last edition, providing all the necessary information to take an excursion into Rwanda's enormous and poorly understood neighbour.Rwanda continues to change and develop at an unprecedented pace, and there's hardly a more accessible part of Africa to be found anywhere on the continent. It's no less intriguing for the convenience, however, and Rwanda's superlative natural attractions seem to improve by the day, with growing animal populations and an on-going rhino reintroduction program in Akagera National Park.Having now gone through nearly 18 years of editions, Bradt's Rwanda is not only the most in-depth guide available, but also the guide with the longest history in the country itself.

2175
6 929 Ft 8 450 Ft
Lonely Planet’s Best of New Zealand is your passport to the most relevant, up-to-date advice on what to see and skip, and what hidden discoveries await you. Take the plunge with a bungy jump in Queenstown, sip fine sauvignon blanc in Marlborough and craft been in Nelson, and watch the iconic Mitre Peak appear through the mist in Milford Sound – all with...