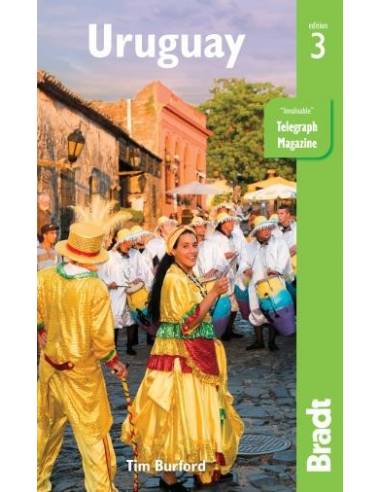 This new, fully updated third edition of Bradt's Uruguay remains the only dedicated English-language guide to a country that's small yet bursting with character. Bradt's Uruguay provides in-depth coverage of the capital Montevideo, where the once-derelict colonial Old City is undergoing a historic resurgence, plus detailed information on the UNESCO-listed coastal city of Colonia del Sacramento, as well as Punta del Este, where the Buenos Aires glitterati decamps to the beaches each summer. There's advice, too, for active travellers who can rattle their whips on cattle-ranching estancias and spin their sticks in a game of polo or two and for nature enthusiasts keen to watch wildlife in the western wetlands and birds in Cabo Polonio and Santa Teresa.

The guide also investigates the Brazilian influences behind Uruguay's music and dance, an active and upcoming food and wine scene, and the country's distinctive Afro-Uruguayan heritage, most noticeable during the world-beating 80-day Carnaval season. In addition, it covers the recent development of marijuana tours following the legalisation of marijuana.

Uruguay caters for all tastes, whether you want to ride with gauchos and spend time on a traditional estancia like La Sirena, visit Fray Bentos and discover the history of the town's former meat-packing plant, or take a tour of the Canelones department wineries. Montevideo's Splendid Art Deco architecture and colourful annual Carnaval are covered, and so too are the stunning sandy beaches of boho-chic fishing village José Ignacio and the Termas de Daymán - Uruguay's largest hot baths. Also included are San Javier, an ideal base for bird-watching trips along the Río Uruguay and details of hiking in Quebrada de los Cuervos National Park - a subtropical canyon filled with flowers and birds.

Most commonly known for winning the first soccer World Cup, electing the world's so-called 'poorest president', and raising a whole lot of beef on the pampa, Uruguay remains among South America's safest and most stable destinations, an destination replete with interest waiting to be discovered by both leisure and adventurous travellers.