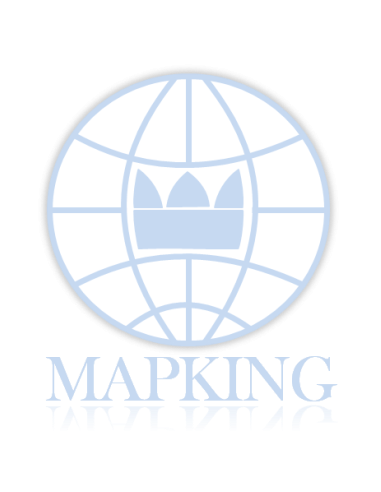 A detailed and attractive general map showing relief through altitude tinting, with an inset administrative map also included. Coverage extends beyond India to include the whole of Nepal, Bangladesh and large sections of Myanmar, Pakistan and Afghanistan. The Maldives, Andaman & Nicobar Islands and Eastern India (Assam & surroundings) are shown in insets. Selected peak heights are indicated and some terrain features such as salt flats, glaciers & swamps are distinguished. Several categories of roads are distinguished, including selected minor roads and tracks, with intermediate driving distances marked on many routes. Railways, shipping routes, airports and ports are marked and administrative region boundaries (and disputed frontiers) are shown. Symbols denote major places of worship, palaces, temples, beach resorts, antiquities, archeological sites, museums, tombs, and other places of interest. Lines of latitude and longitude are drawn at 2° intervals. In another inset is a political map at 1:23,000,000 showing India’s administrative divisions.The multilingual legend includes English, Hindi, Russian and Chinese, among others. The index is on the reverse, and for each Indian location states the province in which it lies. Towns in adjacent territories are also indexed.