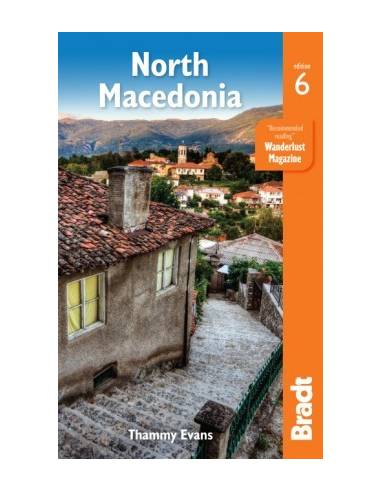 Bradt's North Macedonia remains the only standalone English-language guidebook to this increasingly popular destination available outside the country. Originally written by Thammy Evans, a political analyst who lived there for five years, this new edition has been thoroughly updated and restructured to make it even easier to use by Philip Briggs, arguably the world's most experienced guidebook writer.

Coverage of national parks has been increased and hiking information has been fully integrated to make it more accessible to casual users. Introductions to many points of interest have been expanded to give more of an overview of what the attractions are and there are several new and redrawn maps. Of all the new countries formed following the break-up of Yugoslavia in 1991, North Macedonia was the only one to attain independence without bloodshed. This is a small land that offers huge variety to travellers, from the oldest lake in Europe to soaring forest-swathed mountain ranges and from the millennia-old Neolithic rock observatory at Kokino and Roman mosaics at Heraclea, to dozens of historic and actively-used mediaeval monasteries and mosques. North Macedonia's urban centrepiece and main port of entry is the capital Skopje, now home to a wealth of Ottoman buildings, a lively culinary scene, and several world-class museums, while the main tourist hub is the pretty lakeshore town of Ohrid, a UNESCO World Heritage Site thanks to its wealth of medieval churches and other architectural gems. A trio of national parks provide refuge to brown bears, grey wolves, the rare Balkan lynx and a wide variety of birds. And wherever you go, welcoming family-run tavernas and lively pavement cafés serve authentic traditional cooking and locally produced wine that ranks as probably the most affordable anywhere in the European Balkans. Wherever you go and whatever your interest, this is a country that offers countless rewards to independent-minded travellers and those who want to get away from the crowds. And with Bradt's North Macedonia, you'll find everything you need for a successful trip.