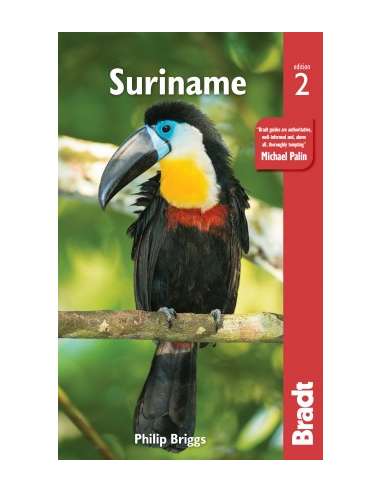 This new, thoroughly updated edition of Bradt's Suriname remains the only dedicated English-language guidebook to this emergent and largely unspoiled ecotourism destination and offers by far the greatest depth of coverage available. It is also the first guidebook in any language with a comprehensive section on the Upper Suriname River, an exciting and remote area serviced by around 20 small lodges.

Detailed coverage of all accessible parks and reserves is included, including the three main marine-turtle viewing sites and the Central Suriname Nature Reserve (a UNESCO World Heritage Site), with information geared to people joining organised tours as well as those who prefer the independent travel approach. Also included are detailed maps and town plans - many of which are unavailable in any other resource and have been drawn by the author using GPS specifically for this book. Peaceful and politically stable, Suriname is one of the world's most thinly populated countries. Its Caribbean coastline is famed for its peerless turtle-watching opportunities, while the interior is swathed by a vast tract of pristine Amazonian rainforest,rich in wildlife and accessible only by air or along the tropical waterways that incise it. The guide includes a detailed introduction to the diverse wildlife and intriguing history of the only former Dutch colony in South America, along with detailed regional coverage of the tropical coastline, the Historic Inner City of the culturally diverse capital Paramaribo (a UNESCO World Heritage Site), and the thrilling opportunities for exploration afforded by the jungle-swathed interior.