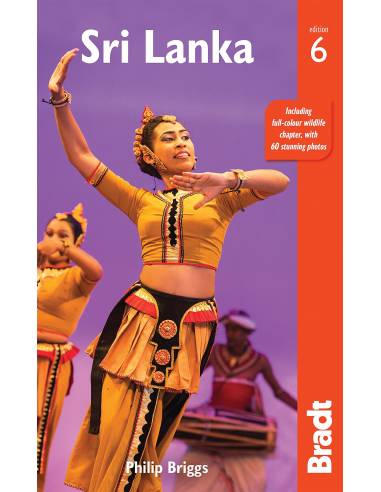 The new sixth edition of Bradt's Sri Lanka is the longest and by far the most comprehensive guidebook ever published to this alluring island nation, and now includes a brand new, detailed, full-colour wildlife section.

Freshly researched and completely rewritten by Philip Briggs, one of the world's most experienced and highly regarded guidebook writers, the new Bradt guide incorporates detailed coverage of every aspect of this diverse and compact land, from the idyllic tropical coastline to the misty forests of Hill Country. Not only does the book provide in-depth sections on all major beach resorts, archaeological reserves, historic towns and national parks, but it also introduces adventurous travellers to a host of intriguing lesser-known sites, along with many emergent destinations inaccessible for decades prior to the end of the civil war in 2009. Extensive hotel and restaurant listings, covering everything from exclusive boutique hotels to shoestring homestays, have been compiled from scratch rather than updated from historical information, with each entry having been cherry-picked by the author based on his personal inspection of hundreds upon hundreds of properties countrywide. More than 70 newly drawn maps cover all towns and resorts of note, as well as the main national parks and their surrounds. Sri Lanka has enjoyed a high level of political stability and safety since the civil war ended in May 2009, encouraging a tourist boom in the south, and the gradual opening of the north and east to independent travel. Beach holidays are an all-year attraction, while a host of fantastic Buddhist-affiliated UNESCO World Heritage Sites ranges from the massive dagobas of Anuradhapura, built in pre-Christian times on a scale to rival the Egyptian pyramids, to the exquisitely painted cave temples of Dambulla. Wildlife-viewing opportunities abound, and this guide provides unparalleled, illustrated advice on making the most of these. Asia's densest wild elephant and leopard populations are protected in the island's extensive network of national parks, and there's also fine offshore whale and dolphin-watching, and a bird checklist of 450 species including more than 30 endemics.